At the reception after a recent concert, I was asked a very interesting and thought–provoking question. “What are you thinking about when you are performing music?“ I had just been playing music by Rachmaninoff and Liszt. “Is there a specific story that you are trying to tell?”

As I attempted to answer, I realized that it never is about a story line; that would be far too specific and rather limiting in scope. It’s much more abstract than a concrete plot. Unconsciously we’re communicating emotion- feelings emerging from the sounds created. An English psychiatrist brilliantly explained the process as “the need to make symbols.” For the poet, it’s with words; for the musician, it’s with notes and how these come together.  For me, it is the most direct language with which to communicate and to touch souls.

As I tried to explain what goes through my head as I am performing, I realized that most of the preparation work has been done beforehand. The analysis, the understanding of the form and structure, mastering the technical problems, shaping the work, coloring and pacing the climaxes— an awareness of how all the musical elements then combine to form a whole— something so complete that it feels inevitable as it unfolds.

I remember a conversation that I once had with a piano professor who taught at the University where I had been a student. We were discussing how to learn a new piece of music. He proclaimed to me that he would always start with the details and then eventually the piece would come together. For me, it is just the opposite.  I believe that you must start with the big picture: tackle the form, see how all the pieces fit, and then once you have the shape of the work, the details will eventually follow. The mold must solidly be in place before uncovering the surprises revealed within. 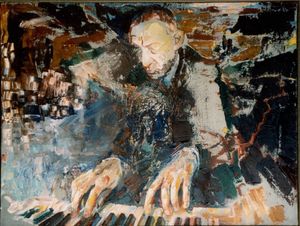 For me, playing the music of Rachmaninoff involves another problem— the issue of control and freedom— how to create that perfect balance between the two. Rachmaninoff pulls us into his deep Russian soul and the performer must enter his world to experience and convey the emotions that he must have been feeling when he wrote this music. Yet how far can we go inside his darkness without losing ourselves completely? The performer must walk an emotional tightrope. How easy to get swept away—never finding the pathway out of the darkness into the light! How much freedom can we have without losing complete control; how much control is necessary without sacrificing freedom of expression? That is the constant struggle in the quest for harmony and balance.

So to return to that initial question: if we were only telling one specific story, how much easier that would be than boldly venturing out into the unknown with every performance.  However, it would not be as rich or as fulfilling an experience— emotionally, musically or spiritually for either the performer or the listener!

And so we keep trying to get a little closer every time!!