Ever since I was a child, all I ever wanted to do was play the piano. I believe that my awareness of the instrument began the first time I heard my older sister trying to master Rachmaninoff’s Prelude in C# minor. I must have been four or five years old, and that is the moment I started to beg my mother for piano lessons. In our neighborhood, there was one piano teacher who serviced the entire block of row houses, going from door to door teaching every child how to play the piano. Looking back, I can understand how he did it— he used the “one size fits all” approach, and his rote method proved successful. I think he could have taught a monkey how to play with his technique of  “repeat after me: first line E, second line G, etc.” Except that method didn’t work for me. I never could remember what he was asking me to repeat, and guess I just didn’t understand. After several unsuccessful attempts to teach me, he concluded that I was a lost cause and generously suggested to my mother to stop wasting her money as her little girl was never going to be able to play the piano. However, my mother was not someone to give up that easily, and she insisted that we continue. In retrospect, I am a wonderful example of a late-bloomer. The light bulb did not go on until several years later, and then I just started to read music on my own. So the adage that a child learns when they are ready to learn is appropriate here, and I am living proof of that.

Thank goodness for the piano. Growing up it became my secret best friend. I could tell it anything; it knew when I was happy or upset, and playing the piano always made me feel better. It represented a safe and magical space where nobody else could enter. It blocked out the world around me and transported me to a very special and sacred place filled with beautiful melodies. And it still does!

The piano has helped me to weather many storms encountered during difficult periods of my life. And now, when all of us are hibernating in forced isolation, my constant friend is my Steinway. What I find so interesting is the music I have chosen for my seclusion. I have no desire to be with anyone else but Beethoven these days. He is the composer who speaks to me at this moment in time. Perhaps now I can better understand his sense of isolation— the silence and lack of social contact. Reworking one of his late sonatas, Op. 101, I realize that this blocking out of the world enabled him to be the revolutionary that he was— to go his own way without distractions. Nobody influenced Beethoven or stopped him from soaring to the heights he achieved. And he left his mark on every composer who followed him.

I am amazed by his strength of character, his vision and his humanity.  As deep as his soul seemed to be, he could still speak to every man with directness and relevance. Exploring his piano sonatas, I am stunned by the modernity of his writing— so ahead of his time— the voice of the future. 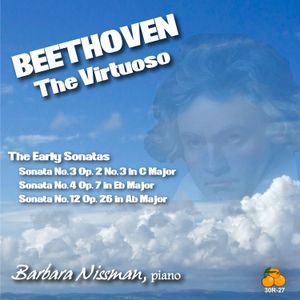 I am pleased to share with all of you, our latest CD that has just been released. I have gone back to the early sonatas that I learned many years ago. What a joy to revisit old friends and see things much more clearly than I did in my youth. I am amazed by the virtuosity of the master and the minimalism of expression.

There is no filler in these works—just direct communication from his heart straight to ours.  What a blessing for all of us!