Even someone like the virtuoso performer Vladimir Horowitz, (were he alive today) might be impressed with the pianistic level of the pianists, regularly appearing on the competition circuit. There seem to be no technical problems or unsolved hurdles in evidence. Pianism has been mastered. However, the question remains- is that all there is!! Is it enough??

Franz Liszt was known to have told the students who frequented his master classes in Weimar, “I don’t care for the piano-bashers. I don’t care how fast or loud you can play your octaves.” Never having encountered any technical problem at the keyboard himself, Liszt did not have to analyze his natural technique and rarely focused on the teaching of technique. A limited student was advised, “I do not wash dirty linen here; go back to conservatory.”  In other words, after you have solved all the technical problems, then you can come back and participate in Liszt’s master classes, and gain inspiration from the Master. Liszt’s virtuosity gave him the freedom to make musical magic! And he preached to all who came to play for him: “Go and create memories!” Share your musical inspiration! 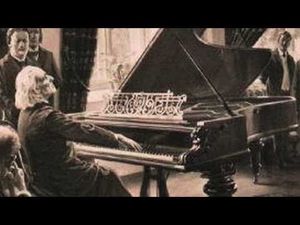 As spectators, we have been overwhelmed by the “sport” of playing the piano. After a while, we have come to expect this level of technique and dazzling pianism. We sit in awe as if we were watching a professional tennis match or a championship fight. What is missing from all this is our heart’s complete involvement in what is going on—the emotional connection. Can the pianist help us to forget the technical component of what he is doing and just focus on the musical message- the story being told by the composer? Is the pianist capable of going to that next level to concentrate on the making of music- pure music using technique and virtuosity as a means and not an end?  More importantly, is the performer capable of making the listener feel something more than just technical admiration for a job well done. Is he or she inspired by the music and can they transport us to another world- a musical world of magic! Does the performance connect with our hearts and make us feel?   Not very often!

Recently, I caught an old film clip of Philippe Petit, the French high-wire acrobat, making his illegal walk between the Twin Towers of the World Trade Center (pre-9/11/2001) Quite an amazing feat that was! Watching him, there was no doubt about his focus, his expertise, his intensity of concentration and his own belief in what he was doing. But it also went beyond that- Here was a man who was truly inspired and aided by something beyond just his own self. This was an artist who could connect to all of us – watching him do what he did so well conveyed a sense of hope— a renewal of spirit and a belief that someone could actually achieve the 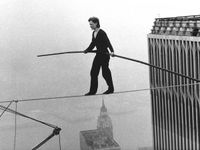 impossible!! And for a moment this man on the high wire made us forget our own limitations and helped us to believe in miracles.

When I walk out on stage, it’s as if I am walking that high wire without any safety net in place. I need to trust and have faith in something much higher than just myself and my own technical skills so that I can communicate the musical message and bring to life the spirit of the composer.  It is an opportunity that has been given to  “create memories”- to inspire the listener with music that I believe in and am passionate about - to share in a magical experience. That is the ideal- to touch the souls of all who listen!