This year marks the 100th anniversary of the Argentine composer Alberto Ginastera and I have been joyfully celebrating the man and his magical music. How blessed I was to have met this extraordinary composer when I was just finishing up my doctoral studies at the University of Michigan. Actually we met after a rehearsal of his First Piano Concerto and that’s when our friendship began. I remember how excited all the students were at the prospect of meeting such a prominent composer from Latin America and having him attend our rehearsals and concert. And I remember all of us remarking that he surely didn’t look the way we had imagined— remember this was 1970 and we couldn’t google him beforehand on the internet.  Judging from the passionate and evocative music we heard, we didn’t expect to meet a man who could pass for a rich South American banker! But no matter— appearances are never what they seem. This was a man who wrote music that seemed to bypass the brain to go straight to the heart and was felt in the pit of the stomach- gut music! His music made us feel- it touched a nerve and titillated the senses. It was passionate- it was magical!! It was music that could only be written by a “man of Latin America” as he liked to call himself! 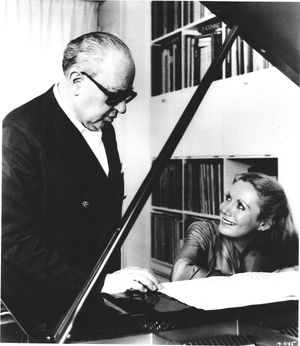 It was after that performance that Ginastera promised to write me a piano concerto!! Wow! What a gift that would be! We didn’t meet again until 1976 when I was living in the Netherlands and received a call from him. “He would be celebrating his 60th birthday in April and could I come and play his Piano Concerto as part of his birthday concert in Geneva with the Suisse Romande Orchestra?” And what a joyous celebration that was! Ginastera accompanied me to the first rehearsal that the conductor scheduled with only piano, harp and percussion. Nobody wrote for percussion the way Ginastera did! What was extraordinary about that first reading was that the concerto had morphed into a completely new and self-contained composition. And Ginastera was quite excited when he heard it and said after the rehearsal,  “The concerto I will write for you will be a concerto for piano and percussion- for one piano!! (We both laughed because we had just been discussing Bartok’s Sonata for two pianos and percussion.) Over the years, whenever we would meet, we would talk about “our” Concerto – the piano concerto that Ginastera intended to write.

Unfortunately life intervened, and Ginastera became ill with a terminal illness. Sadly, time was running out for him. I was preparing to return to the States to make my professional debut at Alice Tully Hall, and Ginastera offered to write me a solo Sonata instead of a full-scale concerto. This short one movement sonata became his final work, the Third Piano Sonata. He had intended to add an Adagio introduction but there was just no time. He wrote this sonata from his hospital bed in Geneva. Perhaps he knew that this would be his last composition when he wrote the words, Deo gratias over its final measure.

Deo gratias for our friendship Alberto and for all those wonderful musical discussions we were able to have. I treasure our friendship and feel blessed to have known you and your wife Aurora. Your music is so full of life and joy and passion. It inspires us to follow our hearts and pursue our dreams. What a gift you have contributed to the world and all we have to do is listen to feel its magic!!
(Ginastera Festival at Spectrum, NYC on April 14, 2016)